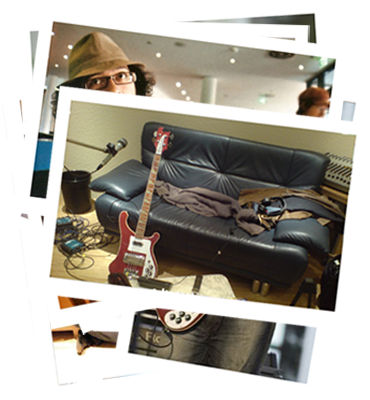 1976 Rickenbacker 4001 Burgandyglo
Some players accuse Rics of lacking in versatility, but I have yet to try a bass that sounds as good on record or live. I’m forever getting compliments about her looks & tone. If I’m only allowed one bass, this is it.

2009 NS Design WAV4 Electric Upright Bass
Double bass is a relatively new skill-set for me but am having a lot of fun with this beautiful instrument from Ned Steinberger’s stable. My newest toy!

2007 Squier Standard Precision Special (PJ) Antique Burst
One of the nicest PJ hybrids from the Squier stable. Precision specs but with a modern slim Jazz neck and a J pickup at the bridge for extra versatility. A great looker with classic Fender rock and soul tone and a genuine workhorse.

2009 Saint Blues ‘King Blues’
Memphis-based St Blues helped us with a few guitars for the 2009 Rich Webb tour. I took one of their PJs & we did some clinics & shows with them. She has grit & punch in equal measure & plays like a charm.

2008 Italia Torino Hollowbody Shortscale
When we were looking for alternative tones during sessions for Rich Webb’s ‘Beautiful World’, Taranaki Guitars (Germany) were kind enough to lend me a few Italia basses. I developed a soft spot for this model.